At the start of 2009 I finished work on my first solo album, titled “The Exited Door.” It is a collection of thirteen original songs, and it features just about every Bay Area musician I know.  It has been, to embrace the cliche, a labor of love – I began work on the record at the start of 2008, and spent most of the year shepherding the disc from conception to completion. I am immensely pleased with the finished product.

This is the fourth in a seven-part blog series detailing the various phases of its Part one covers the album’s initial conception. Part two is on the writing and scoring of the music. Part three details the creation of the album demos, and Part five covers the final recording sessions and the initial mixing process, and part six covers mixing, editing and mastering the tracks. Part seven is about the artwork, photos, and design.

The record is now available at CDBaby.com, as well as for download from iTunes and Digstation. Tracks from the disc are streaming on my myspace page.

With the demos complete, the music scored, and the parts written, it was time to head into the studio and record the actual musicians. Since I had sent demos and charts out to everyone already, my plan from the outset had been to do modular recording sessions, breaking things up to make it easy to schedule time with each musician or group.  The Urban School has a very cool Pro Tools HD system and Control | 24 board, along with a nice big main room and an isolation booth.  Knowing that I wouldn’t be able to run the sessions entirely on my own, particularly when I was playing (on the horn session), I enlisted the help of two student engineers at Urban, Sam Tygiel (who is also a brilliant young flutist, guitarist, and songwriter), and the always-professional, low-key Daniel Moattar.

The great thing about demoing in Pro Tools is that it makes it possible to take the demos you’ve created and really easily replace tracks one-at-a-time through several sessions, until you’ve got a whole new recording. In other words, the demos act as templates for the finished product.

The plan was to record the musicians over the following sessions:

My schedule was wide open all through the summer, and as a result of that, as well as the total awesomeness of the administration at Urban for allowing free reign in the studio, it was pretty easy to schedule the recording sessions.  First up was doing drums with Brian Carmody, a good buddy of mine whom I’ve always wanted to record on some of my stuff.  Brian currently lives down in LA with his wife – they’re both involved in the industry down there, and he is also getting his master’s in jazz performance.  Since the drum sessions would require the largest amount of time set aside, it was the toughest to schedule, but we found three days at the end of July that worked.

Carmody showed up to the studio, drums in tow, with a gigantic walrus mustache.  It was amazing.  I hadn’t seen him in months, so it kind of blew my mind – he was apparently growing it out for a bachelor party that week, so I’m assuming that he’s gotten rid of it, but if not, well, he looks pretty great.  Kind of like a British soldier in the revolutionary war.

Daniel M. had helped me get the mics all set (or so we thought) the day before, so it was simply a matter of setting up Brian’s drums and checking the levels.  Also, a simple matter of finding out that, for whatever reason, Urban’s snazzy Beta 52 kick mic was completely done for and had no signal.  Blerg.  Brian had also almost brought his own kick mic, and had opted not to, so an emergency “Guitar Center Rental” was required.  I had about zero dollars in my bank account, so it was particularly harrowing to buy a $250 mic that I had no intention of keeping.  But, them’s the breaks.

After flying to the GC in Brian’s van, getting the mic, and coming back, we were all set.  Over the next three days, we recorded a ton of takes on all of the tunes – Brian was a total champ, and brought a ton of creativity to the session.  I particularly love his playing on “Lock You In The Attic,” and “The Mayor.”  If I could release three versions of each of those tunes to show off all of his takes, I would.

Recording the drums was a little scary, too – it was the first time I’d overseen and engineered a drum session, and while I liked what we were getting, I was quite aware that it wasn’t up to the sonic standards of the more-professional sessions we’d done with Peter in Squaretape. These tracks were going to require a significant amount of cleaning after-the-fact. In particular, I wasn’t thrilled with the sound we got from the bass drum. In fact, I plan on taking at least one class on miking techniques somewhere in the next year, just to get better at miking drums. I’m pretty good at miking everything else, but drums are such a giant exploding beast… it’s tricky.

After that weekend, I spent a little bit of time trying to go in and clean up what we’d recorded before realizing that there was just no way to tackle mixing these sessions until we’d re-recorded everything – the timing of the fake bass, demo vocals, and fake horns and strings were completely different than Carmody’s drumming.  So, the next thing to do was Brian Fox’s bass tracks, as well as Daniel Fabricant on upright bass.

Fortunately, both of those sessions required far fewer tunes, and had a much easier setup; each session took only an afternoon/evening.  Both Fox and Daniel were total pros and came super prepared. Fox had, as always, some really cool gear (he’s an editor for Bass Player Magazine); he brought this small, warm bass combo amp that got a really killer tone, particularly the overdrive on the double-stops he played on “The Mayor.”  Daniel was ready to rock on everything, even “The Bird Women of Golden Gate Park” – and if there’s one thing I learned during the recording process, it’s that that tune is H-A-R-D.

Once those sessions were done, the other ones flowed pretty fast into one another.  Galen Rogers and I did a quick marimba session for “Bird Women” earlier in the summer (since he was leaving for college in August), and it went really well.  That kid blows my mind – he did a fantastic job on what has to be the single most difficult piece of music on the entire album. What’s more, the sound of the marimba is just so great – it was clear after recording him that “Bird Women” would be a standout track on the disc.

The string session was a blast – Sevan Suni, whom I know through the awesome Mike Gibbons, is a violinist to whom I’d given a free sax lesson two years prior, on condition of a trade for future violin playing.  I finally called in the favor, having never really heard her – I was mainly banking on the remarkable speed with which she had picked up the sax in our lesson. Additionally, I had Alex Kelly on the first cello, and Urban students Lilly Moebes and Julia Heller (who would also play trombone) on second violin and cello, respectively.  I was a bit nervous – I had no idea how everything would sound, and spent a long time tweaking the orchestration to get as full a sound as possible.

Well, everything sounded great. Sevan came in and rocked the casbah on the first violin part – she brought a fantastic level of expression to the string part in “No Crow, Scarecrow,” as well as to the rest of the session.  The low cello parts sounded just as I was hearing them in my head, and really fleshed out the sound on Lindsay’s tune, “You’ve Changed.”  Alex’s solo on “Lock You In The Attic” was another highlight, particularly since it was notated in an approximate fashion and required him to learn the pacing by ear, on the spot in the studio. That guy is one seriously talented musician.

Horns went really well, too – Brian Switzer (trumpet), Fil Lorenz (Bari Sax), and cellist Julia Heller (Trombone) all came in; I played tenor, and Sam T. recorded us.  It’s always kind of a trip to get into a horn section and play through charts on tunes that I haven’t really been thinking of as “charts.”  Fortunately, I spent a good deal of time proofing the charts, so there weren’t any mistakes. And by “weren’t any,” I mean, “There were totally a few.”  Everyone did great, especially Julia, who brings a level of talent to things that goes way beyond her years (girl is, like, seventeen!).  Switzer stuck around afterward and we did all of his solo parts on “No Crow, Scarecrow” and “If You’re Feeling Out Of It,” and they went great.  The amount of thought he put into his blend, intonation, and solo at the end of “Scarecrow” really reflected how seriously the dude takes the finer points of his performances. It was really impressive.

Joel Behrman came in and recorded separately – he had been away for part of the summer, and once we got in touch, I realized that it would be really easy to plug him into the sessions even if we recorded him separately.  There were two things I wanted him on – after the horn section session, I wasn’t totally happy with how the big trombone slides on “The First Time” sounded, and I had also left the space for Joel to solo at the end of “Down By The Water.”  He came by my place one super-hot afternoon in September and we recorded for a couple of hours.  Good lord.  That guy is a monster.  Take after take, note after note, he blew the doors off the place.  “I haven’t been playing, like, any trombone lately,” he said, “It’s all been trumpet.”  Badass.  We got about ten takes of the solo on “Down By The Water,” and each one was unique.  “Here’s kind of a ‘Witch Doctor’ thing,” he’d say, or, “You want it more diatonic?  Cool, how about this?”  It was a billion degrees in my room, we were both totally sweating and I was apologizing all over for it, and Joel was, like, “Dude, whatever, I’m loving the heat. Let’s do another one.” There was one take, about three from the end, about which I remember thinking “Yep, that’s the one.” It wound up being the one on the record – just an outstanding solo. The whole experience was awesome, and if you ever need a trumpet or trombone player for anything, HIRE JOEL BEHRMAN.

With the large sessions out of the way, it was time to get down to the smaller sessions – woodwinds, solo guitar, vocals and overdubs, and any other instruments that needed recording.  It was also much easier to begin to mix and shape the audio we had, and a picture of how the finished record would sound began to emerge.  The final recording sessions, as well as the initial editing and mixing, will be the subject of the next entry. 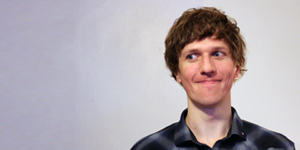 I'm a musician and writer. I live in Portland.

A bunch of my work and ongoing projects are embedded on this page; social media and other links are below.

Things I Wrote For Kotaku